Coach Brad Keenan assembled his team in the visitors’ dressing room. Here’s the situation. boys. Norberry’s backup goalie has a bad case of the flu and won’t be able to play for Norberry tonight. I’ve met with Norberry’s coach, Jeff Hadley, and we have worked out a deal. Miles Myers will finish the game in goal for Norberry. In exchange we get guaranteed home ice advantage in the playoffs,” Coach Brad Keenan explained.

The Maplewood Cougars looked at each other as if they couldn’t believe what they had just heard.

Coach Keenan and spoke directly to Miles Myers, “Miles, this is a great opportunity for you. I have assured Norberry’s coach that you will play to the best of your ability. The better you play during the rest of tonight’s game, the higher you will arise in my estimation.”

Brad then turned to address the rest of his team, “Now I want you to get this straight guys. Miles is not a traitor to his team. He’s helping us get home game advantage during the playoffs and believe me the playoffs is where we’re headed. Now were only down by one goal, so let’s go out on the ice and win this thing!”

When the two teams returned to the ice Miles Myers was roughing up the crease with his goalie skates. He was in Norberry’s goal wearing number thirty in a  Knight’s red and white sweater. 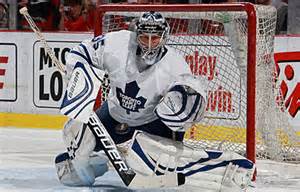